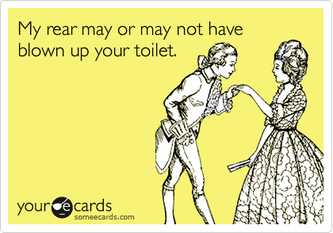 Every now and then we are asked about installing a pressure-assisted toilet.  After explaining the benefits of a pressure assisted flush, we explain to the customer what we used to think was the ONLY downside, which was the noise.  A pressure-assisted toilet will flush AND sound like a commercial toilet you will find when you are out at a restaurant or the store.  This is 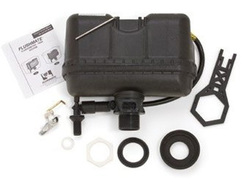 usually enough of a deterrent to steer most people away from installing one of these units.  Now, we have found out there is another reason you most definitely will NOT want something like this in your house, IT MAY EXPLODE!  To know why this happens, you must first understand how these devises work.  Unlike a normal toilet, where the water simply fills up the tank and then is released by gravity to the bowl upon the flush, a pressure-assisted unit becomes pressurized with the incoming water.  The water fills up the black holding tank you see in the photo, and at the same time, compresses and pressurizes the available “free air” inside.  When the toilet is flushed, it now has a great deal of stored energy to be released.  The problem is that the tank has now been known to rupture in over  300 units, releasing all of the stored energy and actually blowing the lid off the tank.  This has lead to injuries to at least 14 people the Consumer Product Safety Commission announced last week.   More than 2.3 million units have recently been recalled.

This gives new meaning to the phrase- “you don’t want to go in there!”

If you have one of these units installed in your home, check the attached link to see if your’s is included in the recall and to receive repair parts.  http://flushmate.com/recall/

If you would like to remove the unit from your toilet, have your toilet replaced or have the new parts installed, you should contact Knoxville Plumbing. 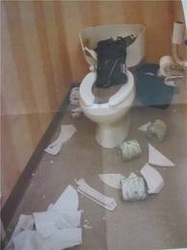